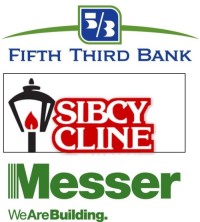 March is a busy month for Workplace Giving Campaigns for the Arts.  This first week, we had three long-time workplace sites kick off their campaigns – Fifth Third Bank, Sibcy Cline Realtors, and Messer Construction.

At Fifth Third, employee donations have already been significant!  Fifth Third is offering an “Angel Day off” for donation pledges at a specific level, which has been a fantastic incentive.   They had performers in the lobby of the 5/3 Tower downtown – Michael and Sandy Bashaw performed  some blues and world music, Danny Voris and Chris Reynolds played some great tunes, and a caricature artist did drawings for employees and passersby over the lunch hour – this was so popular that a line formed!   Steve Petitjean and Amy Rodgers have been organizing the events for this week – many thanks to both of them.

At Sibcy Cline, they celebrated Fat Tuesday in style at their Beavercreek location with a Mardi Gras themed event complete with King Cakes, jambalaya, and red beans and rice.  General Sales Manager Bob Mahoney entertained the crowd with his juggling skills, and VP Robin Sheakley came up from the corporate office in Cincinnati to enjoy the event and talk to the agents about the importance of supporting arts and culture in the community.   Lisa Fix and Claudia Adelhart from the Sibcy Cline corporate office have been very enthusiastic about and supportive of this year’s campaign and we are so appreciative.

At Messer Construction, we joined their quarterly meeting at the beautiful Marcum Center at Miami University in Oxford and Martine Collier, our President/CEO, addressed the managers about Culture Works and how much their support means to the arts and culture in Dayton. Messer employees have always been very generous donors, and the company matches their donations, which doubles every contribution. Messer  Campaign Manager Don Hayes encouraged giving and talked about the very nice prizes they are offering – iPads and Kindle Fires.

All three of these companies have one important thing in common – wonderful support from their corporate offices, and a company-wide recognition of the value that arts & culture brings to this community.  We are fortunate to have such great companies supporting the arts organizations so enthusiastically – a wonderful start to this Campaign Season!